Create Your Own Luck

See the photo above? You can click on it to see the full photo.

Now guess at where it was taken, how long the photoshoot lasted, who the girls were, and how much mucking around there was to get the lighting and backdrop right.

If you guessed that it was taken outdoors in the middle of a city street with four girls who were total strangers to me, that the photoshoot lasted less than fifteen seconds and involved just two sentences spoken to the girls (“Can I take a photo of you ladies please?” and “Thank you”), that there was absolutely no setup, that I simply lifted my camera to my face and took two photos.  If you guess all these things, you’d be right. 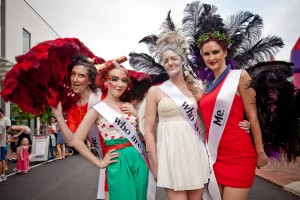 Here’s what the same photo looked like before I took to it in Photoshop.  There wasn’t a lot we could have done about the background, but the lighting, the composition, and importantly the girls and their poses are all amazing given the impromtu nature of the photograph. It’s not often a photo like this comes along. When all the planets seem to align and you effortlessly capture some rare moment of perfection in amongst the messiness of daily life.  It’s easy to brush it off as a “lucky shot”.  But was it really luck?

You create your own luck.

It was no accident that I happened to be walking down that street with a camera slung over each shoulder.  This was a public event I was photographing for the Town of Claremont who were hosting it.  I was actively looking for photo opportunities.  It was no accident that I had already thought ahead of how to make best use of the natural light at that time and knew to face my subjects in that direction and try to put a catchlight in their eyes with a bit of flash, and no accident that I had an appropriate camera body and lens ready for exactly these type of shots of people at this range.

Now let’s turn our attention to the ladies. It was also no accident that these ladies were there.  No accident they had spent all afternoon getting their amazing costumes, hair and makeup done.  There were heaps of street performers, musical acts, and entertainment for the public.  Here were four professional models clearly there to promote their cause.  And they were very good.  Although they were walking around seperately engaging members of the public, as soon as I approached one of them for a group photo, without me having to say another word, they all immediately came together into this pose.  No accident. They were looking for photo opportunities too, and were absolutely ready when they appeared. 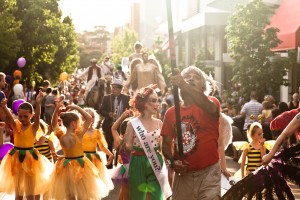 So this “lucky shot” was simply a case of everyone involved doing their respective job well.  These ladies gave me a fantastic opportunity on a platter, and it was up to me to get the photo in the bag and do them justice. Of course luck still plays some part as it does with everything in life, but the critical thing here is that we were both looking to get a great shot, we only had 15 seconds to get it, and we did it because we were prepared. There were plenty of other performers and great photos at the event, but none presented the same kind of opportunity as the four models above.

There’s a saying that “90% of good photography is being there”.  And I believe that.  There’s no such thing as a lucky photographer.  All those photographers that get “lucky” shots made a conscious decision to be in that place at that time with a camera in their hand.  That’s not called luck, that’s called being prepared.