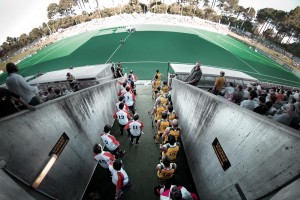 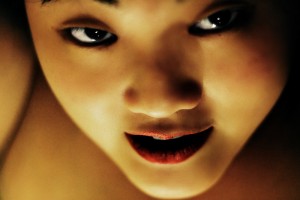 A trap that many people fall into when photographing an event is to try to capture everything in a single shot.
An overview shot can be very useful to give a sense of the whole environment, but don’t expect it to capture many specific details or communicate anything more than a general sense of being there.  It’s very rare that you can communicate an entire story in a single image.  Instead, try to think of telling your story through a series of images.  Use each photograph as a paragraph in a story that might be a couple of pages long.  You might want to use a wide shot to set the scene, but then fill in the details with a series of tight shots.

If you want to communicate something personal, you need to get in there and get intimate.  Viewers like to relate to people in photographs, to make a connection with them.  Use this to your advantage by making your photographs about people, evoke an emotional response, and remember that your subjects eyes will make or break your photographs.  The viewer will always instinctively focus on the eyes of people in your photos and react accordingly.

Don’t be afraid to chop bits out of the image if it means you’ll be able to capture important details.  The closer you get (either by zoom or by walking) the more intimate and personal the photo will feel.  But remember that the environment can also provide a great context that says a lot about a person too.  There is no right or wrong about shooting wide or tight, but the important thing is to make it a deliberate decision. 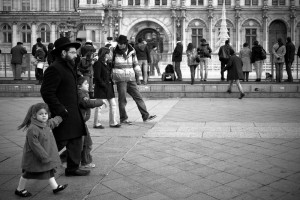 Below are a couple of examples that illustrate differences between shooting wide and tight, and also the effect of eye contact on a shot.  Click on each image to view a larger version of it.

In the black and white first example, I deliberately chose to shoot a wide shot of a little girl.  As much as a zoomed-in tight shot on the little girl’s face would have made a pleasing photograph, it would have completely lost the context of the photo; a jewish family walking through Paris against the backdrop of onlookers with their backs turned (watching ice skaters out of shot).  As it stands, the direct eye-contact with the little girl combined with plenty of open space in the image is strong enough to make her the central subject of this photo, despite the fact she is so small and tucked away in the corner.  This image works because she is the only person in the photo making eye contact.  If there were other competing elements then it would have lost it’s impact.

In this second image I’ve cropped in extremely tight and you can’t see the subject’s eyes at all.  There is no personal connection with the subject, yet being so close you feel like you are right there in the pool getting wet along with the athlete (a player for the Canadian water polo team).  It has an intimacy to it, but it’s more about the viewer experiencing the sensations of the water.  The athlete remains somewhat anonymous because his eyes are hidden.  I actually consider the water to be the subject of this photo. The person here provides the context for the story, but the message is contained in the water.